This work envisions a world that is being smothered out.  An abstract form runs throughout, appearing as a black blob, a gestural mark, or an enveloping slime, continually destroying her images of landscape. Jessica’s narrative unfolds in three parts: “What Stranger Things,” “Search and Explore,” and “I Don’t Know”, where each element begins to tell the story involving idealized nature photography, a path of destruction, and impending doom.

“What Stranger Things” is a series of paintings of landscapes that are based on locations Langley has visited: a dead lake in the Adirondack Mountains, a forest of trees destroyed by the Pine Beetle in the Rocky Mountain National Park, and a stack of logs in a park outside of Copenhagen. These locations themselves are not significant, but these images tell a story about a human presence, however direct or inadvertent. The abstract marks flatten the pictorial space, creating a bridge between the depicted scene and an unknown space. The last two images serve as a warning and a mourning for the landscape.

“Search and Explore” is a series of collages with images of outdoor gear falling into an abyss while the black wave obscures the image. Three text pieces are interspersed and blurt out expressions of sarcasm and apathy popularized in the 1990s. The title of the series refers to the Sierra Club’s motto, “Explore, enjoy, and protect the planet,” and to the hostile military tactic, “Search and Destroy.” These images depict a hopeless situation in which a sense of optimism falls away into a void.

The four diminutive three-dimensional pieces, “I Don’t Know I-IV” are upward bursts of green and black slurry enveloping postcard images of the American West. These are tactile, yet flat, so that the foreboding gestures serve as windows into what may come. The viewer must peer down into an upward surge of a toxic green/black slime. The title refers to the dire result of claiming, “I don’t know,” a catchphrase from the popular 1980’s Nickelodeon series, “You Can’t Do That On Television,” in which the person who made the statement would get a bucket of green slime dumped on them from a source off camera, always overhead, seemingly omniscient. 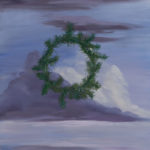 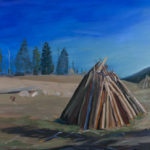 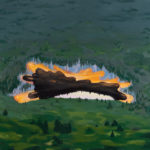 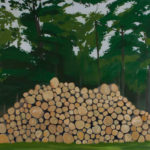 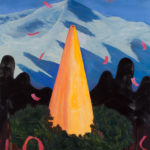 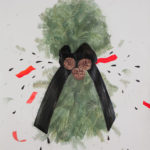 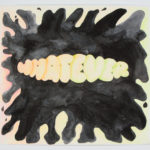 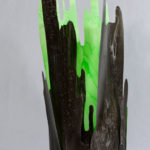 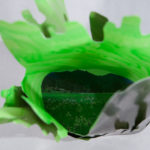 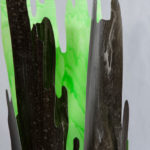 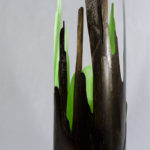 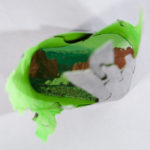 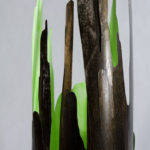 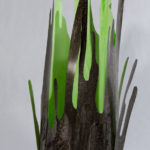 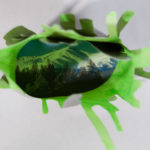 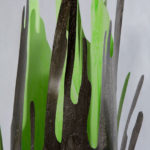 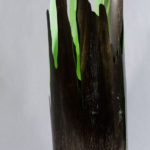 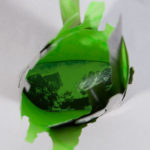 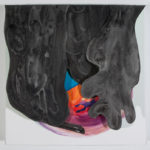 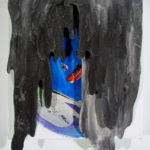 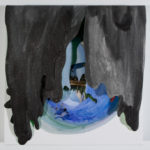 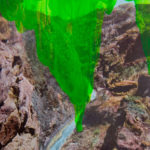 "Canyon City Slime." acrylic on postcard. 4in x 6in 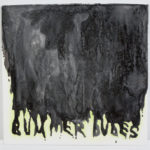 Adirondack Slime. acrylic on postcard. 6in x 4in